Next stop on our backwards review of what we've been up to during The First Age of No Posts is the weekend of July 27th through the 29th. We got married on August 1, 2009, so the purpose of this trip was to celebrate our third anniversary. Awful traffic through JBLM and a stop for lunch at Fish Tale Brew Pub acted as time-killers as we counted down the time until check-in.

On our way we passed through such exciting cities such as Montesano (Greta's home town) and Aberdeen. There are some cool sights along the way like the abandoned cooling towers of the Satsop Nuclear Power Plant and... well... THE STAR WARS SHOP IN ABERDEEN. I haven't convinced Katie yet to let us stop here, though most of the time it is me that wants to keep on going since we've already been in the car for few hours.

We pulled in to Iron Springs Resort right around 5pm, just enough time to unpack, get settled, start dinner, and turn on the London 2012 Opening Ceremonies. I loved the quirky bits with Daniel Craig and Rowan Atkinson that reminded us all to not take everything too seriously. We called it a night once the cauldron was lit.

So why Iron Springs? Well, previously in the year we were here for a razor clam dig...

...and despite the gray, wind, and rain, we thought it would be awesome to come back in the summer.

That trip in the winter was kind of a bust in terms of finding clams. Even if I could see their tells in the sand (which was very difficult because of the wind and rain), I figure I had about a 50% to get them. If I remember right, I got 5 clams over two days. It does make me sleep better at night knowing that I was using a shovel instead of a clam gun. It builds character, doing it the hard way!

Besides clamming, there were a healthy doses of puzzling, Magic playing, needle felting, and failing to start fires all around. We had a great time.

And back to the present. Luckily, our hunch that it would be pristine in the summer was very correct.

We spent a majority of Saturday afternoon sitting on the beach. It was the perfect temperature with just the right amount of breeze. Greta even went for a swim. Well, as much of a swim as she can considering she's deathly afraid of water. There's a very fine line with Greta - the water level can go from ankle-deep to you're-drowned in an instant.

There was a charcoal grill at the cabin, which was something I hadn't used in a long time. These things get way hotter than any gas grill I've ever used. Like, "I can't even flip the burger without burning all the hair off my arm," hot. The first night we had some awesome steak that I cooked for juuust a minute or two too long from perfection. The second night we had pork tenderloin that took much longer than I thought it would. I am chalking it up to screwing up the distribution of coals. Whatever, the food still turned out great.

It was a very relaxing weekend, though like most was far too short. Having only one full day there really isn't enough. I look forward to our next stay there, whether it be another (hopefully more successful) razor clam hunt or a peaceful mid-summer jaunt. 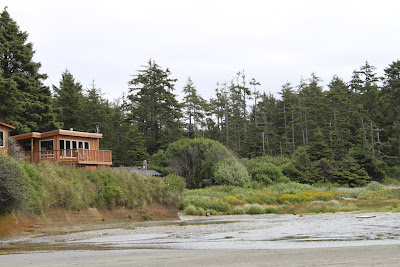 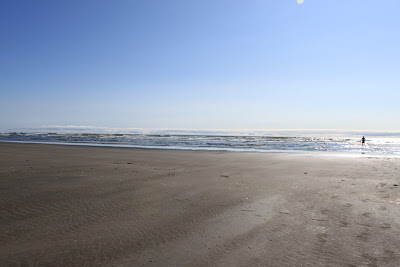 On our way home from work last week, Katie and I were discussing some of the blogs we follow when I had the sudden realization that we have our own blog. It has seriously been over half a year since either of us has posted anything. And of course when anyone asks me, "So, what have you been up to lately?" my answer is unanimously, "Oh not much." That isn't entirely true, so let's get going on writing that wrong.

There will be a series of posts over the next week or two that will cover what exactly we've been up to the last few months. To confuse everyone as much as possible, I'm going to start at the present and work my way backwards.

The Great Outdoors wasn't something I was exposed to much as a kid, and that's been something Katie has taken a great interest in changing. It combines a couple of her passions: connecting with nature, going places never visited before, mini-road trips, and going to REI and spending a ton of money.

We went camping two summers ago at Lake Wenatchee State Park, where I got about a dozen mosquito bites while unloading the car. I spent 2 days covered in some surely toxic mixture of DEET, mosquito coil smoke, sunscreen, and calamine lotion. The experience didn't leave a sour taste in my mouth so-to-speak, but it was definitely tart.


This past weekend we trekked over to Hood Canal (which is a fjord!) to camp at Dosewallips State Park. It's a very different camping experience than Lake Wenatchee: pretty flat, less privacy, and most importantly: a lot less mosquitoes.

There was one party a few campsites away from us that appeared to be a weekend getaway where all the dads took their sons for some camping debauchery. One child, let's call him Logan, because that is what his dad screamed every five minutes, was the King Terrorizer of the group. He would ride his bike in the opposite direction of the rest of the kids, try to do tricks on his Razor scooter (which always resulted in failure and him doing several barrel rolls across the pavement), and shot anything and everything with his water gun. At one point he even pistol-whipped one of the other kids.

My run-in with Logan happened at the water tap where I was rinsing off a cutting board. He was there standing defiantly with his pump-action water shotgun. As I was finishing up he looks at me square and says, "I'm going to shoot you," like he's some sort of cold-hearted-son-of-a-bitch 7 year-old Russian mobster. Knowing that there wasn't really anything I could do if I wanted to avoid a situation with Logan's dad, I threw my arms up and said, "Okay..." and of course he blasts me right in the front of my shorts so it looked like I peed myself. In retrospect I bet I could have got a high-five from his dad if I would have done the, "hey cool super soaker dood, can i see it for a sec?" and drowned him with his own gun, but I took the higher/wussier road.

We decided to take Greta along for the trip, mostly just to see how she'd handle it. Turns out that she can be an actual dog: playing around in the dirt, lying in the grass, and "protecting" us from all those other evil people and dogs at the campground by barking without remorse. It also turns out she can't handle more than about 5 minutes of direct sunlight before she gets so hot she begins uber-panting.


On Saturday, in between grilling, drinking beer in fold-up camp chairs, and enjoying a couple great campfires, we ventured out to the park's beach. We both thought that it would be pretty close to the campground, but in actuality it's about a mile. It was a nice, flat trail with a pretty mucky section near the end. There were a few dozen folks hanging out at the water's edge.


While we didn't make it that far our, we did spot a seal pup nestled in between a couple of pieces of driftwood. We were sitting on a piece not too far away when I kept hearing some sort of shuffling behind us. Finally I got a glimpse and figured out what it was.


After an inappropriately long nap in the shade, we hopped in the car to see what else the area had to offer. There was another state park, Triton Cove, not too far down the road which consisted of a small rock beach and a boat launch. I skipped rocks (doing the prerequisite try-to-skip-a-ten-pound-rock joke) while Katie soaked in the views. It's really a beautiful area with high peaks plunging right down in to the water. She also found this tiiiiiiny (albeit dead) crab.

Here's a short tour of our campsite #67 and a shot of what it looked like in the morning. We both had a lot of fun and look forward to the next time we camp there! 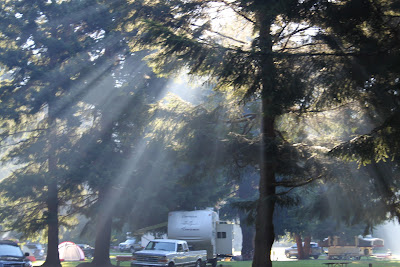 Posted by Adam No comments: