My hobbies tend to come and go in super-obsessed, condensed phases. I get really in to something (like playing Fallout 3 for about 22 hours over the four day Thanksgiving weekend), and then, well, it just goes away. Whether it be playing video games, reading books, watching a particular TV show, blogging, or getting back to playing the trumpet, no time-sink is safe.

However, there's one exception. The one hobby that has stayed with me for the better part of a decade has been Magic: The Gathering. If you haven't played, or even heard of the game, here's the gist from the Magic's lead designer, Mark Rosewater: "Magic is a strategy card game representing a magical duel between two players." Still with me after that? Okay, great! It basically invented the Collectible Card Game genre, paving the way for things like Pokemon and Yu-Gi-Oh. Think of it like Uno, except you get to build your own deck to draw from, and every so often new cards come out that do more than force your opponents to draw two cards.

Since my parents got me the Portal gift box for Christmas back in 1997, it's always been a part of my life in some form. Sure, as soon as I got some cards, everyone I knew that played the game stopped playing. Minor setback. Then in high school when we'd see people play it in the lunchroom, we dismissed them as outcasts and nerds. We're way too cool for that. Then sometime during Senior year, I don't exactly remember the catalyst, but everyone that used to play came to the conclusion that we should try to play again all around the same time.

And so it began.

What followed were dozens of visits to Crazy Tony's shop on Casino Road in Everett, countless late nights in my parents' basement playing gigantic, multiplayer free-for-all games on the pool table (heaven forbid we ever actually play a game of pool!), and an incalculable amount of hours pouring over thousands of cards. I spent so much of my disposable income (read: all of it) at Tony's during that first year or two that he thought I was some hot shot VP over at Boeing. The toupee he wore was older than me, so I don't know what ever gave him that impression.

For whatever reason about 4 years ago, I stopped playing, buying cards, and reading about the game. It wasn't a cold-turkey situation, the game just drifted away and in to the shadows over the course of a few months. Life pulls all of us in various directions, and the stars just weren't aligned for a while.

When I got back in to the game this past spring, fueled primarily by Card Kingdom and Cafe Mox opening up down the street, one of the projects I tasked myself with was organizing my collection, which had been scattered across multiple closets around the house. It took me about the first 3 seasons worth of Parks and Recreation to finish - about 16 hours. Lots of late weeknights.

This is what my collection looked like in the final stages before I put them all in long 5-row card boxes: 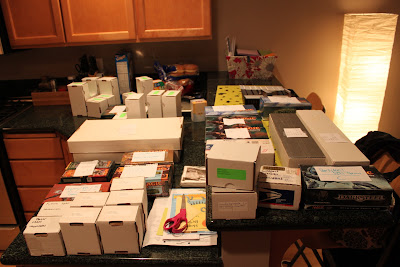 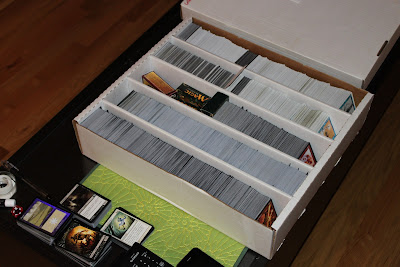 There are 5 boxes, just like the one in the pictured above, filled with cards. It's kind of a sickness.

The reason I bring all this up is this weekend I'm going to head over to Seattle Center and participate in a Pro Tour Qualifier. It's a feeder tournament for the Pro Tour in Honolulu. Yes, this is a competitive Magic tournament. You see, when you started reading, you didn't even know this game existed, and now look at you! If I win (extremely unlikely in a field of hundreds of players), I get an invite and a plane ticket to the PT Honolulu. Lose or lose (just being realistic!), it will be a fun way to spend a Saturday morning.

Wizards of the Coast has a fun little website where I can track my competitive progress. Here is my page. They call it Planeswalker Points, because you represent a super-powerful being called a Planeswalker when you play the game. Sure, it might be a little dorky.

But I don't care. I love this game.
Posted by Unknown