My first shot at homebrewing

Making my own beer has always been a hobby that is in the back of my mind. I drink a lot of beer, why not make some myself? My friend Jon and my father-in-law Barry both homebrew regularly, and I've definitely drank more than my fair share of their labors. It's time to return the favor.

But, but... baby steps! Anything that has any sort of process (be it playing a game, building a Lego model, or cooking anything [yes, even ramen]) tends to lock me up. I look over the instructions numerous times before I feel like I'm ready, even if the smartest thing to do is to just dive in and learn as I go.

Thankfully, Woot put up a Mr. Beer kit a few weeks ago, and I took the bait. I like to think of it as a paint-by-numbers for making beer. A trial run at homebrewing, if you will.

I was kind of kicking around the house this morning, wondering what I was going to do with my afternoon. When I opened the door to go get the mail, the answer was sitting on my doorstep: Mr. Beer had arrived. 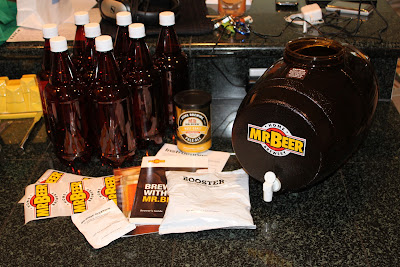 Included in the kit is a 2 gallon keg, 8 1-liter bottles, a bag of "booster" (which it turns out is just corn syrup solids), a can of hopped malt extract (West Coast Pale in this case), a little bag of yeast, a packet of sanitizing solution, some stickers, and my favorite: the instructions! The keg and bottles are all plastic to keep it simple and reusable.

Here's a few shots of me inspecting the kit. Nothing really exciting going on here. 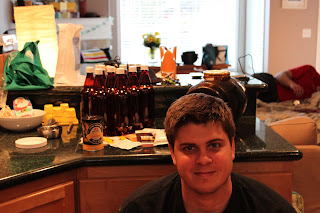 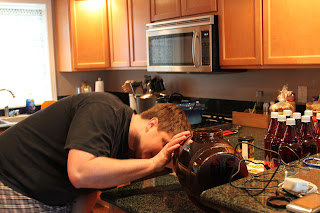 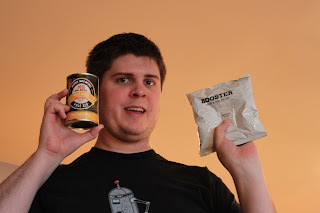 First step: reading the instructions! Seems easy enough: sanitize your stuff, put some water in the keg, mix the booster with 4 cups water, boil it, add the HME, throw it in to the keg, add more water, add yeast, cap the keg, then wait two weeks.

Second step: sanitize your stuff. This involves putting water in the keg, dumping some powder in it, swirling it around, and putting all your brewing tools (measuring cup, can opener, whisk) on a plate that you also sanitized. Here's a couple of non-action shots of this step: 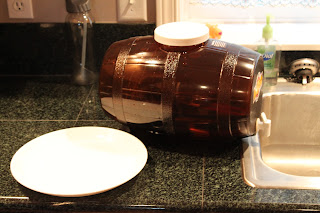 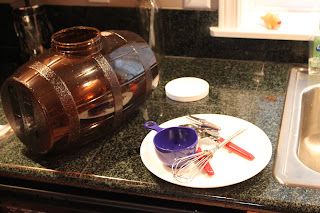 Third step: put some water in the keg and some water in a pot. Mix the booster with the water in the pot. This took forever, as the instructions say to pour & mix the booster SLOWLY (in scary capitalized and underlined text) in to the water. It didn't really clump up like other mixes do, but it took a long time to dissolve. After that, I cranked up the heat and waited for it to boil. The booster apparently adds both alcohol and body as its packaging states, which is what beer definitely does to you when you drink it. 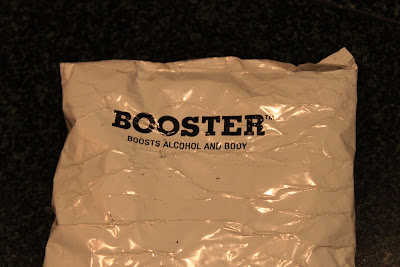 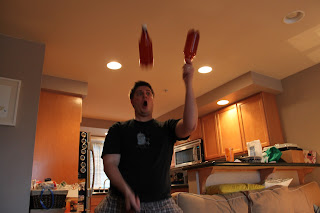 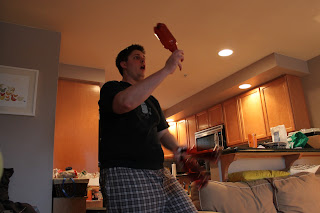 Fifth step: add the can of beer goop to the boiled boosted water. The can of beer goop, officially Hopped Malt Extract, looked and smelled like teriyaki sauce. I love me some teriyaki, but if my beer ends up tasting like it I'm not going to be thrilled. I put my trust in Mr. Beer to make my beer not taste like teriyaki. 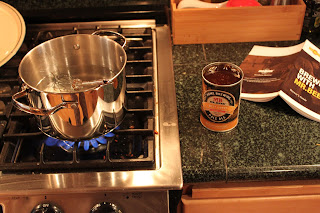 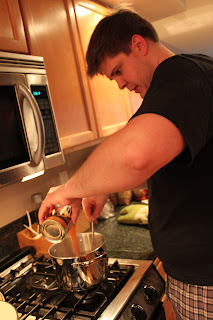 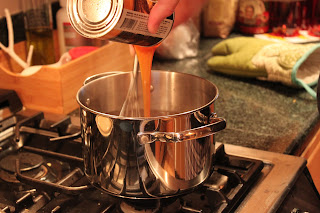 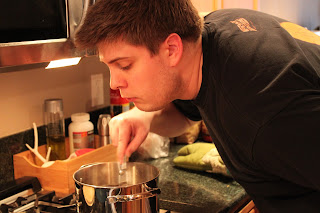 Sixth step: throw the mixture into the keg, add more water, then add the yeast. Pouring the hot, goopy liquid into the small hole at the top of the keg was a bit tricky. I came this close to pouring the crap all over the kitchen. When I added the yeast it started to get all bubbly and looking like I actually made Real Beer. 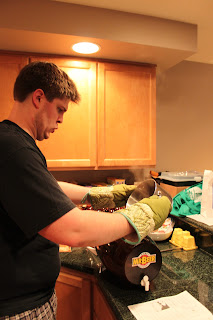 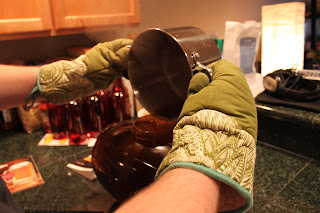 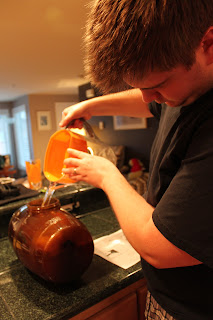 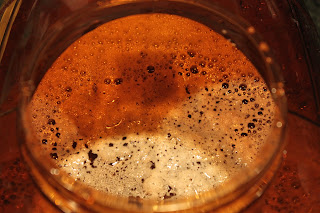 Seventh step: wait a couple weeks, storing the keg out of direct sunlight in an area between 68-78 degrees. I opted to put it over by our fireplace, which has a little pilot light which tends to keep the area right around it a little warmer than the rest of the house. That spot is also shielded from sunlight, so it meets the criteria. 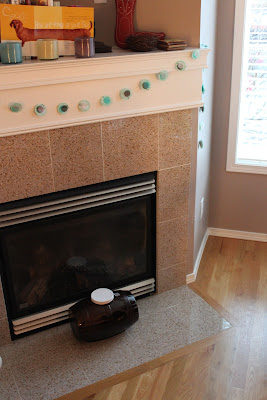 So there it will sit, for two weeks. At that point, I'll sanitize the bottles, add a bit of sugar to each bottle, then fill it with beer. Then I have to wait another two weeks to condition the beer (a.k.a. just wait more), which takes two more weeks! Mid-February is when I'll be enjoying this.

All in all, this process took me a little over an hour and I had as much fun as you can have stirring and boiling water. I've watched Jon do The Real Thing and it is much more exciting and of course you can improvise a lot more than you can when you are pouring a can of goop into a pot. If this works out okay, I'll get a few more kits from them. Then, I'll do it The Real Way, without all the weird, canned beer goop.

Here's a preemptive "Cheers!" for six weeks from now.
Posted by Unknown