At 7:00 this morning, I received the phone call I'd been dreaming about all night: my office decided to close for the day. With a small cheer, I grabbed the dog and bounded downstairs to continue watching the news broadcast on this iteration of Snowmageddon. After about 30 minutes, it hit me. What, exactly, was I going to do all day?

After shuffling around the living room and brainstorming for a few minutes, I realized nothing could make the morning more complete than a batch of warm, fresh cookies. My only hurdle was a lack of ingredients. For the most part, I consider myself a cook and not a baker. I like the randomness of cooking - being able to take a few basic ingredients, throw in a few random ones and (for the most part) have it turn out. Baking is so...directions follow-y. I make cookies once every 2-3 years - the last time being in 2009 during that year's Storm of the Century. Luckily, I was able to scrounge up some sugar (lumpy, but workable), flour (I keep this on hand for lefse, duh) baking soda and vanilla. Bam! Sugar cookies were in my future.

Due to my previously mentioned lack of baking experience, putting the dough together took some time and pep talks on my part. An example conversation (with myself) went something like this:

"Combine butter and sugar and whip with a mixer until light and fluffy. Light and fluffy? How the h#ll do I know when it's fluffy? Alright, then. Batter, let's do this. Let's grab the mixer. Oh that's right. Let's turn it up a speed. You can do it. Fluff it up. Would you consider this fluffy? Who even knows. Keep mixing."

Adam considered it more of a trash talk to my dough. But hey - there was a large amount of uncertainty on my part and only so much lumpy sugar. I only had one shot.

After I successfully finished the dough, and let it sit in the fridge for an hour and a half, I started the rolling process. The first couple times I did it were sketchy at best, but after a few rounds of cutting out shapes and remixing the scraps, I got the hang of it. Thankfully I ransacked my parents' old kitchen in Everett years ago, and had in my possession all the cookie cutters from my childhood, plus a few I seemed to have collected over the years.
Once the cookies were out of the oven and cooling, I attempted some frosting. In my head, I was going to make 4 or 5 different colors, use my sprinkles, and get super creative. I quickly realized I was not making enough frosting to do more than 2, my feet hurt, and my sprinkles were somewhat lame. I chose what was supposed to be mint green and purple. 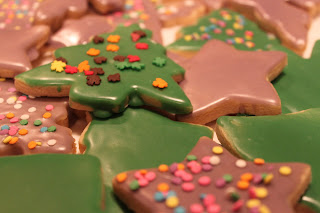 All in all, the cookies were a success. After all the rolling, mixing frosting and epic kitchen cleaning, I took a nap to celebrate. Happy Snow Day! 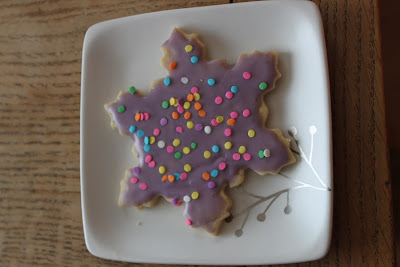